Harbin today is a Chinese city, but still recognisable as one first built by Russian settlers.

As the first Trans-Siberian trains completed successful eastward journeys in 1896, Tsar Nicholas II’s ambitious Finance Minister, Count Sergei Witte, wasted no time in focussing on another route: the Chinese Eastern Railway. Central to Witte’s grand plan was the newly-formed city of Harbin, which he hoped would link Lake Baikal with Vladivostok, and then command the trade routes running south into China.

Accordingly, the Imperial Russian government seized partial control of the area, and chose Harbin as the hub of the extended railway. Harbin’s population began to expand quickly.

By 1903, when the railway was completed, the modern city was taking shape. One section of Harbin, the current Daowai district, was controlled by the Qing Dynasty government. The other, roughly equivalent to today’s Daoli and Nangang districts, was governed by Russian colonists, on the pretext of managing the railway.

Following their defeat in the Russo-Japanese War (1904-5), Russia’s influence declined, and 160,000 nationals from 33 countries, including the United States, Germany and France, moved to Harbin, setting up thousands of new businesses, alongside Chinese entrepreneurs.

By 1917 Harbin was home to around 40,000 Russians, including White Russian émigrés fleeing persecution by the Bolshevik regime and an older Russian Jewish community, whose forebears sought a new life free from harassment and discrimination in pre-revolutionary European Russia.

Although the White émigrés were mostly left stateless after 1922, their community briefly thrived in Harbin through the establishment of a Russian educational system and Russian-language media.

Zhongyang Dajie (Central Street), one of the prime business streets in Harbin, bears witness to the cosmopolitan business climate of the day. The 1.4km street is a veritable museum of European architectural styles, including Baroque and Byzantine facades, little shops baking Russian bread, French fashion houses, American snack food outlets, Japanese restaurants and a Christian church. Believing this church had damaged the local fengshui, the Chinese community donated money to build a monastery, the Jile Temple.

In the 1930s, when northeast China became part of the Japanese puppet kingdom of Manchukuo, Harbin fell under the direct control of the Japanese Government. Non-Japanese residents were forced to learn Japanese and suffered political prejudice.

During the Second World War the notorious Japanese Unit 731, a germ warfare experimental station, was located on the southern outskirts of Harbin, killing thousands of Chinese and other nationals by gruesome means: some of the most brutal war crimes ever committed. The site is now a well-presented museum.

By the late 1930s the number of local Russians had already fallen sharply, although Stalin’s purges dealt harshly with those returning to Soviet Russia. In August 1945 Harbin was occupied by the Red Army and the remaining Russian population all but disappeared.

Nonetheless, after the Chinese Communist victory in 1949, Harbin quickly recovered from the war and rose to become a major economic hub.

After the political and economic reform of China in the late 1970s, Harbin, along with the rest of China, enjoyed enormous progress. The city developed into a major river port and has sponsored eight international trade fairs and the third Asian Winter Games. With the absorption of the Songhua River Region in 1996, Harbin again became the largest city in northeast China.

With thanks to Russia Beyond

Today there are signs of a nascent awareness of the need to preserve Harbin’s cultural and historic heritage. Historic places of worship still extant include the 1907 Russian Orthodox Church of St Sophia with its landmark green dome; the 1935 St Alexeevsky Church and the 1921 New Synagogue, now a museum.

The annual Harbin Ice and Snow Sculpture Festival begins officially on 5 January and lasts until the end of February. However, it actually opens to visitors just after Christmas. At this time ice lanterns are complete and about 70% of the snow and ice sculptures may be completed. If you visit early you may see the sculptors at work.

The festival is a unique annual event, attracting many tourists from home and abroad. Ice lanterns will be shown in the Harbin Ice Lantern Park and snow sculptures will be on display at the Sun Island in the city. Aside from the ice art exhibition, a series of activities will be held including, winter swimming, ice hockey, skiing and trade fairs. 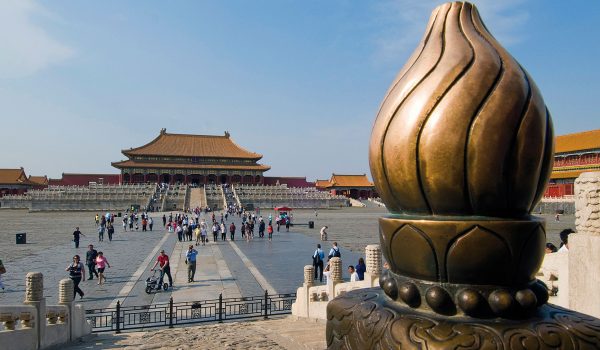